Still think there are no stupid questions?

I sent a message asking how to use NCM. Since it’s been more than 3 days I am asking here.
When I just go to a browser and type NCM in I can understand it fine & enjoy it, (although it got stuck on server error) but on the app on my iPhone after I hit calculate instead of giving me a move suggestion such as b2b3 it gives me Bd1. I don’t know what that means.
Also I am not familiar with what FEN PGN mean.

Thanks for your help!
Ori

Greetings! I tried to reply about 25 minutes after you opened the ticket 3 days ago – can you check your spam folder? Regardless, it is a great question so I’ll reply here!

So the “Bd1” you’re seeing is the move in “SAN notation” – in this case it’s saying “bishop to d1”. NCM used to show this notation by default, but we switched to SAN by default during our last major rewrite several months ago. You can always click on the move to have it executed on the board.

The other notation you mention (“b2b3”) is, best I can tell, is known as “Smith” notation. You can go in to settings and disable SAN notation to get back to the b2b3 notation.

These are both ways to represent, in text, the board. FEN and PGN are both standards used by lots of chess software, so they’re useful if you want to, for instance, copy your position from NCM into some other software or vise-versa.

Also I’m curious about the errors you were getting on the app! There are a couple of known bugs that can result in server errors that we need to fix:

Could it have been either of these? If you can send me the particular position I would love to take a look and push a fix!

Thank you for your quick & helpful reply.

This stuff is amazing.

The server error is on my pc NCM site, not the phone app.
I’ll try pasting a screen shot here, but if it doesn’t work I’ll send
you an email. 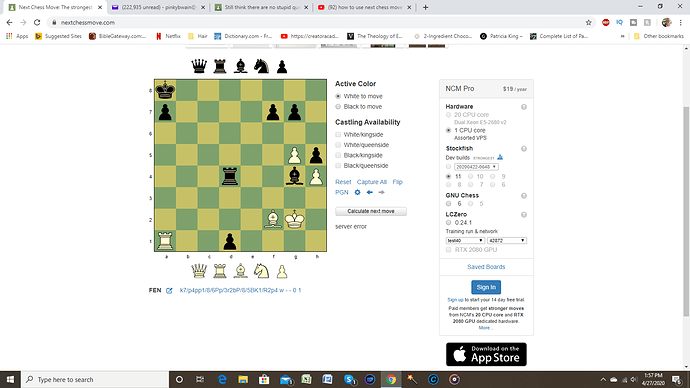 Aye, yes! That’s the “pawn in 8th rank” bug. That black pawn on e1 needs to be promoted. Assuming you want to promote to queen, you can drag a black spare queen from above the board on top of the pawn. We need to fix this!

I just deployed a quick fix. Now, when there is an un-promoted pawn, the calculate button gets disabled with the message “Unpromoted Pawn” similar to how it does with chec, checkmate, and stalemate. Perhaps a better fix would be to explicitly prompt the user to promote the pawn, but this at least gives some indication as to what is happening.