We switched navigation libraries from react-navigation to react-native-navigation, and the new library only allows tabs on the bottom.

As many of you long-time NCM users know, I’m usually hesitant to make major UI changes. I call it the “Craigslist school of design.” However, the new navigation library provides better maintainability and responsiveness, and I actually think it’s better to have the tabs on the bottom because that’s where all the other buttons are. It’s also easier to use one-handed on larger devices. 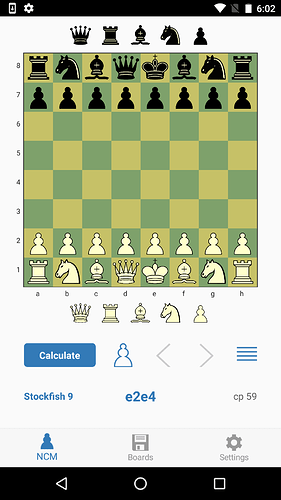 Which brings me to the second major change, which is the “Stockfish 9” displayed left of the move. Tapping that brings up the full engine output. Screenshot below:

Note: You must enable Show Engine Name in the settings tab to be able to see this.

There’s also a bunch of changes to the saved boards tab. Section headers are grey and “stick” to the top while scrolling, the “new saved board” button has moved to the (also new) header, and better animations to scroll to new boards inserted off-screen. Hopefully these changes improve the feel but are less noticeable.

If you’d like to give the app a try before we officially release it, please sign up for the beta! Any and all feedback is, as always, very (!!) much appreciated. You can reply to this topic or email me directly at chendry@nextchessmove.com.