I’ve pushed a fair amount of changes to production earlier tonight. The largest change is the removal of the “captured” area in favor of the spare pieces on top and bottom of the board. These spares can be dragged on to the board.

The motivation of this change has been to keep consistent with what the iPhone app (and, soon, Android, I promise!) will soon be. Specifically, removing the captured area on the iPhone app will make room for the forward, next, and flipped buttons coming soon to the mobile app. (Possibly also buttons pasting FEN and PGN.)

Hello, Ok When I Copy And Paste PGN I’m Not Getting Anything, Can Someone Tell Me What’s Supposed To Happen When This Is Done ??

Interesting – can you tell me the exact PGN that you’re pasting? Here’s a sample that works:

rn1qkb1r/3bpppp/p1p2n2/1p6/P1pP4/2N1PN2/1P2BPPP/R1BQK2R w KQkq - 0 1 Here It Is When I Hit Load Nothing Happens, Actually This Is The FEN At The Bottom Of Page, Maybe I’m Doing Something Wrong, I See What I Should Get In Your Example

I’m Copying The Fen With The Icon Then Pasting Into The Box, Some Times When I Hit Load I Get A Circle With A Line Through It, Maybe You Can Let Me Know What I’m Doing Wrong

When I paste FEN you mentioned into the FEN box, I get: 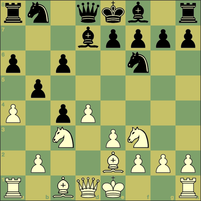 FEN and PGN are really just two different ways to load a board. Depending on which one you have (perhaps FEN found on a website, or PGN exported from another chess program) you just have to use the corresponding method on nextchessmove.com.